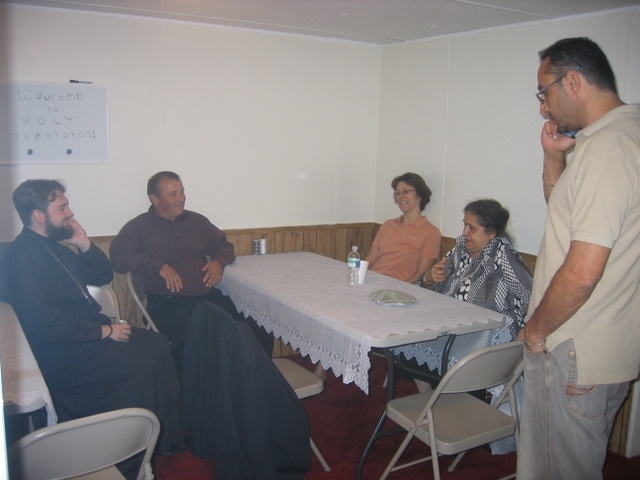 Fellowship After Our First Orthodox Liturgy in Greenville, NC, 2008

September 21 will mark the second year anniversary of the first liturgy at our mission parish, Nativity of the Holy Theotokos in Greenville! Eastern Carolina is a place where Orthodox Christianity is not familiar to most, and as such founding our mission presented a unique series of challenges. Yet in each case, God’s blessings allowed a solution to be found, often in an equally unique way.

I want to take the opportunity to thank all of the parishioners who have worked with me since Day One to establish, maintain, and grow this community. Those who help to establish a mission are pioneers of sorts, stepping into unfamiliar territory often with nothing more than hope and a vision for a bright future. God allowed a diverse group of people to meet each other and form the core nucleus back in early 2008. Property became available at a most convenient time, and I was ordained a priest by His Eminence Metropolitan Pavlos that summer. From the start, we have realized we are fulfilling a plan that is bigger than any of our own desires, or even the sum total of all our goals and dreams. I certainly look forward to each liturgy, to fellowship with such dedicated persons, and in anticipation of new visitors, who always seem to enrich our church family in some way. We hope you’ll be inspired to attend liturgy if you have not already.

We just celebrated the Dormition of the Theotokos, the day when we remember her death and then her bodily assumption into Heaven by her son, Jesus Christ, which Holy Tradition teaches us occurred in order to give a foretaste of what is to come for all who honor God and follow His will. The church year ends on August 31 (September 13 on the New Calendar) and eight days later, we celebrate another feast of the Virgin Mary, her Nativity, which is the patronal feast day of our mission parish. So with the end of the year comes the remembrance of the end of the Theotokos’s earthly life, and with the beginning of the year comes the remembrance of her birth.

September also presents us with the feast day of the Exultation of the Cross (September 14/27). In the second century, Emperor Hadrian had a temple to the pagan goddess Venus constructed on top of the site where Our Lord was crucified. Over the centuries, knowledge of the fact that this was the site of Christ’s crucifixion waned. When the holy Emperor Constantine converted to Christianity, he sent his mother Helen to find the holy sites associated with Our Lord. An elderly Jewish man let Helen know of the temple of Venus being on the spot, and an excavation was begun, where the true Cross was later found. A Church was built on this site, which was dedicated in 335 AD. The Persians later sacked Jerusalem and stole the Cross, in the early 7th century. Emperor Heraclius fought a war with Persia, and was able to get the Cross back, some fourteen years after it was stolen. It was carried back into Jerusalem in solemn procession, and from this time on, the sacred memory of the triumphal return of the Cross has also been recalled on this day.

Two important feasts then teach us about our faith in September. The Nativity of the Theotokos heralds the coming of Christ, as a prelude. The Virgin Mary is the Christian par excellence, faithfully carrying out the will of her son and God. She is an example for us to emulate. The feast of the Cross reminds us that the greatest event of human history was accomplished through great self-denial and suffering. Christ revealed the glory of God by restraining Himself and accepting unjust death in order to save mankind. God is revealed to be a suffering servant instead of a powerful tyrant or popular figure.

Let us learn from the Cross patience and forbearance in the face of difficulties. Let us learn from the Theotokos how to accept the Word of God inside us, growing it, and nurturing it, just as she did physically when she conceived Our Lord miraculously. Christ picked a young woman who was powerless to enact His plan, which He carried out by making Himself helpless on an instrument of death—the Cross. We don’t need fabulous wealth or great power to carry out God’s plan, but only humility, willingness to listen to God, faith, and patience. Our ongoing missionary efforts testify to the success of following these basic principles.