It was a blessing to be able to travel to Astoria, New York the weekend of April 27-28 (May 10-11 on the civil calendar) to attend the Enthronement of His Eminence Metropolitan Demetrius as the new Metropolitan of America and president of the Holy Eparchial Synod of the Church of the Genuine Orthodox Christians of America. This event marked both a new page in the life of our Metropolis and Eparchy in America, and also was a witness to the recent Church union which occurred in March, when ten bishops of the former Synod in Resistance united to our Synod and through them we entered into full communion with the Russian Orthodox Church Abroad under Metropolitan Agafangel, and the Romanian Old Calendar Church under Metropolitan Vlasie.

Both Metropolitans Agafangel and Vlasie sent episcopal representatives to this event (Archbishop Andronik of Syracuse, and Bishops Iosif of Botoşani and Dionisie of Galaţi), who joined the two Metropolitans sent from Greece (Metropolitans Chrysostomos of Attica and Gerontios of Piraeus), the American-born bishops resident in North America (Metropolitan Moses of Toronto, and Bishops Christodoulos of Theoupolis and Auxentios of Photike) and Metropolitan Pavlos, the former Metropolitan of America, whose retirement in late 2013 opened the path toward the Election and Enthronement of Metropolitan Demetrius. There were also twenty-two priests and eight deacons serving.

I left my home in Reston, Virginia early Saturday morning, in order to be able to travel peacefully and without feeling rushed. There was no traffic, and I arrived at the Cathedral of St. Markella around 1:00 pm. One of the things I most like about the Cathedral is that it is open every day from around 8:00 am to 8:00 pm for Christians to come and pray and light candles, and attend services should they be occurring. There have been daily services in the morning and evening almost without interruption since its founding in 1954. One can only speculate as to how much the city of New York has benefitted from these prayers, and what would have happened were they not occurring continuously.

I felt a bit of trepidation in my heart, because this was the first time returning to the Cathedral since I resigned from serving as a priest in April 2013 for personal reasons. My resignation came as a surprise to many, and I certainly let people down. I stayed away for some time to give things time to settle, but it was high time for me to return and see my old friends and associates. If anyone were to react toward me negatively, it certainly would have been good for my soul, but everyone was fair toward me and some were quite encouraging. I appreciated more than one person telling me that he had been praying for me and my family throughout this whole time.

The Organizing Committee was busy doing the last-minute staging, so I sat quietly in the Church for several hours, praying, thinking, venerating icons, and just taking in the scene. A few old friends stopped by and said hello. A Synod meeting was occurring, so the clergy was mostly occupied. Around 3:00, the Synod meeting ended, and I was able to greet the bishops. I saw my ordaining bishop Metropolitan Pavlos for the first time in a year, and it was an emotional time. He was greatly disappointed in me, and yet when he saw me, he was compassionate and loving. I saw Metropolitan Chrysostomos of Attica, with whom I had served twice as a priest during concelebrations, and he offered me his prayers and counsel. My spirits were already being lifted up. 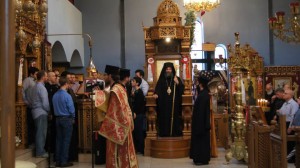 Around 5:30, Vespers began, with chanters from Chicago, Boston, and New York joining together to form a magnificent Byzantine choir. The chanting was excellent. I was especially happy that this weekend was the Sunday of the Paralytic, and the happy-sounding Mode 3 was the appointed mode, which made things especially joyous sounding. Vespers continued for about an hour, and afterward, we were served a delicious meal downstairs by the women of St. Markella’s, with help from other faithful serving us. I had the opportunity to speak to some of the other bishops and clergy, as well as my Koumbaro and Koumbara (my daughter Sophia’s godparents), and make the acquaintance of some of our Detroit faithful whom I had not previously met. I made it back to the hotel at 10:00 pm, checked in, got some midnight snacks, and uploaded photos and videos from the day.

I intended to make it to Matins at the beginning, which was around 7:00 am, but human weakness being what it was, I overslept and made it at 8:45, just missing the censing during Matins and the singing of “More Honorable Than the Cherubim.” It was a warm day, and being someone who has visceral reactions to cold weather, I felt comfortable in the warm sunlight and walked from my parking spot to the Cathedral. The prayers during the Spring and Summer, when the doors are opened, could be heard on the street, and occasionally someone driving by would stop and look in the Church to see what was going on there.

The Matins and Liturgy was an extremely long service, due to it being a Hierarchical (bishop-led) service and due to the Enthronement elements being added on. Metropolitan Demetrius entered the Church, and was vested in the middle of the Church, which is something common among Russians, but almost never seen in Greek parishes. I asked some faithful if they had ever seen it before, and they replied that they had not. The Church continued to fill up. At the singing of the Thrice-Holy Hymn (Agios O Theos), there was a prayer read for the new Metropolitan, while he stood in the high place behind the altar. This was the second element of the Enthronement ceremony. Hymns were chanted in Greek, English, Slavonic, and Romanian.

At the conclusion of the Divine Liturgy was the final part of the Enthronement ceremony, where the new Metropolitan ascended his throne, various prayers were read, and an Encyclical from the Holy Synod was read in English and Greek. Various people made speeches, including a rather touching speech by His Grace Bishop Auxentios, who remarked on how in his earlier life he had been at the Cathedral (he had been baptized at our parish of St. Isidoros in Long Island by Bishop Petros’s brother Fr. Niphon in the 1970s) before departing for monasticism elsewhere, and due to the unfortunate splits in the Old Calendar Church in the 1970s and 1980s, finding himself in the afore-mentioned separate jurisdiction which recently united with us. He came full circle and was back where he started, much to his joy and ours. Some of the children of the Greek school made short speeches to the Metropolitan, and Gerondissa Synclitiki, who knew Metropolitan Chrysostomos of Florina, the second leader of the GOC (1937-1955) spoke of her joy.

After the Liturgy ended, we went to the Chian Federation for the banquet. This banquet was a great opportunity for fellowship and for old friends to be reunited. There were several additional speeches, including a moving speech by Metropolitan Moses of Toronto, and by Bishop Iosif of Botoşani, who spoke in Romanian with an interpreter interpreting into English. He provided Metropolitan Demetrius with an icon of St. Glicherie, the Old Calendarist confessor of Romania, and icon prints to all present. The Cathedral of St. Markella provided the Metropolitan with a new staff. The Byzantine choir chanted various selections to the delight of the audience.

The banquet wrapped up around 7:00 pm, and after seeing my Koumbari again, I left to return to Virginia, spiritually renewed. Many Years to our new Metropolitan!

For the official report, including two photo galleries, see: http://hotca.org/news/28-ordinations/544-metropolitan-demetrius-enthroned

For all of the 18 videos that I took at the Enthronement, see: https://www.youtube.com/user/anastasioshudson